Women rules – ladies rock – girl power – she’s da bomb, among a few phrases for a female who in charge. Few men believe in it, but many of them deny it. It took ages for men to validate the fact of power puff girls.. eh, I mean girl’s power, yet, they are silently admire and crazy about it. Or maybe their egos are too thick, thicker than the lard of a fat fat pig made them unable to say so. Oh come on, they actually love the idea of ‘women on top’. 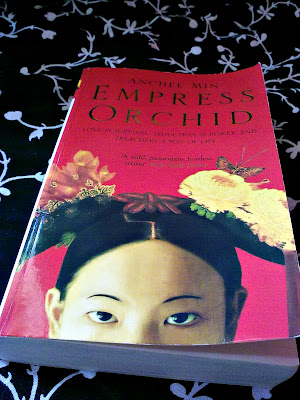 I just finished my reading on this very interesting novel by Anchee Min, “Empress Orchid“. This novel is base on a true story, about the last Empress in China during the Manchu Qing Dynasty, and to me this is far more interesting compare to a New Yorkers fiction fantasy writes up.

Empress Orchid, which was only Emperor Hsien Feng’s lower rank concubine, end up as a Qing Dynasty’s “Dragon Lady” for 48 years after the death of her husband.

I’ve learned many things from this book, from life inside Forbidden City to the tips and technique on how to please a man in bed from the “House of Lotus” as well as the treaties made between British, Russian with China (which ripped China map’s apart). Did you know that Vladivostok, Russia, was known as Haishenwei port and it was originally belong to China?

When I asked my Russian officemate, (he is from Vladivostok) about the history of his country, he replied “no, Russian never took other people land“.

Oh my, if history books in my school were written the way of Anchee Min does, history wouldn’t be the my most hated subject back in time. Ok, enough about history. I hear snores.

But still la, men very biased one…to them, women with power can be very destructive. That’s why they always put all those hurricanes named after a woman name. Pffttt..

How could they possibly forget the fact that they were all breast fed by us once they came out into this world. Ah, Im very lazy to argue le.

Looking forward to read another historical novel in near future.

I am a woman, hear me roar…