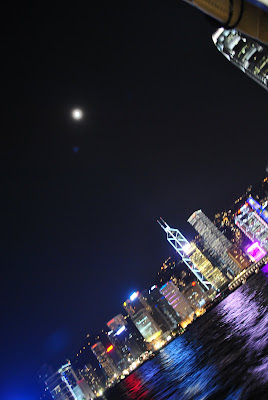 HongKong is infamous with the foods and as a shopping hub, but what can you get with only HKD3,000 in your pocket? Hurmmm not much… 1 piece of top, 1 pair of shoes and few pieces of souvenirs for family and friends…the rest of the cash went to the foods and drinks, and the train, and the cab. In Malaysia, people made such a big fuss with a cabbie, once open the door, it’s already with RM2.00 = HKD4.00 charges. Well.. u would shut the fuck up when u are in Hongkong.. once you stepped in.. it is HKD18.00. Do the math. 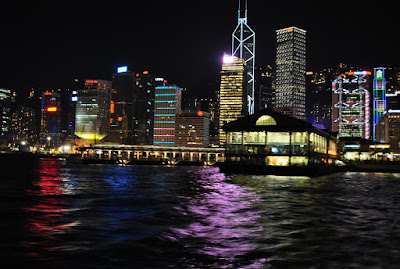 But this a -must – ride star ferry fee surprised me like the news of MJ’s death. Becuz its only costs me HKD2.30…with such a fantastic view of HongKong Island along the river (from Kowloon to Tsim Sha Tsui, vice versa). So I guess this is the only cheap thing in HongKong. Confirm. 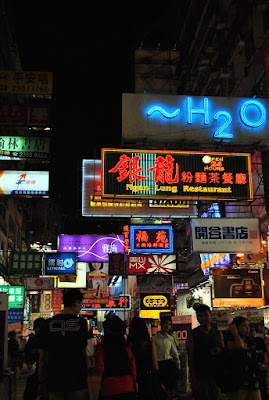 Peoples in Hongkong are very cold, they walked very fast and never smile. They never say “I’m sorry” or similar thing in Cantonese whenever they stepped onto your foot or slammed your shoulder. So.. I just accepted it as if its their culture. 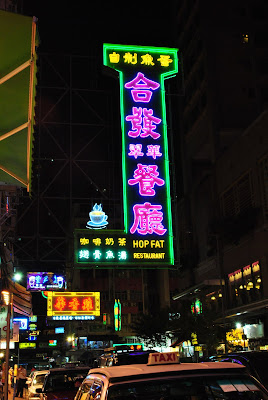 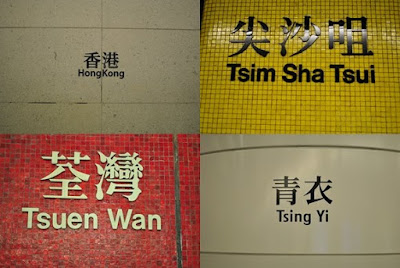 I dont know how complicated HongKong city was…until many of HongKong locals failed to describe us how to get to certain MTR station. They end up scratching their head while we pointing at the map…I dont know whether want to laugh or piss on that particular matter.. 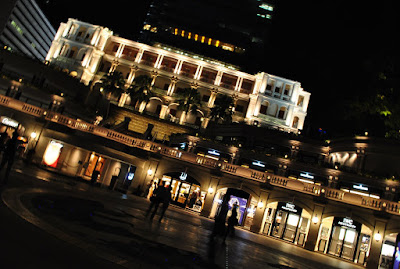 So we just strolled along until our leg felt numb and if we were lucky, we end up at the beautiful spot like this.. 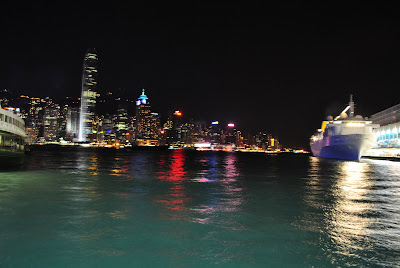 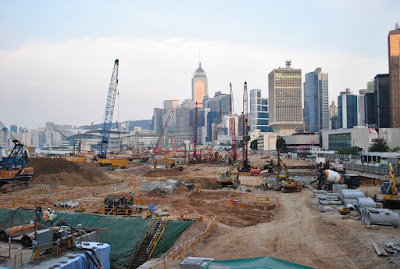 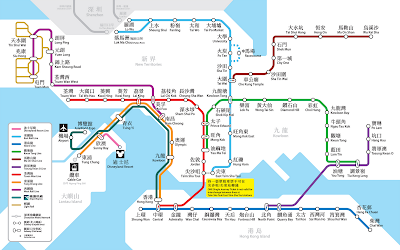 But I think hor.. instead covering up most of the touristy places.. but we end up covered all the MTR stations route.. Tsuen Wan line (Red), Tung Chung line (Orange) and Airport Express line (green). It was becuz we came from Lantau Island (Disney) then stayed at Dorsett Far East ( Tsuen Wan) and visit HongKong Island, then Mongkok, then Tsim Sha Tsui, then Lan Kwai Fong then so many many places which I was too tired to remember…but Ok la.. for 02 nights stay, we covered up so much, and mostly by foot. If we were in “Merentas Desa” event.. we were sure became #1. Anyway, if we were wearing pluffy rabbit slippers, I think we manage to walk up to Shenzen ler.. See the leg la..lol. 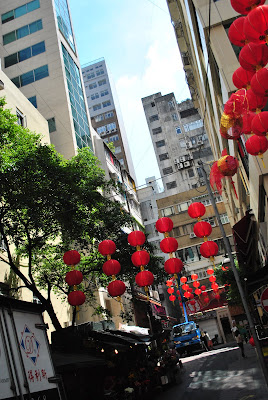 Lan Kwai fong in the morning.. 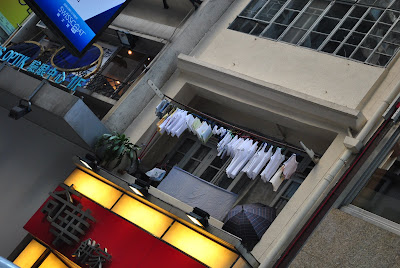 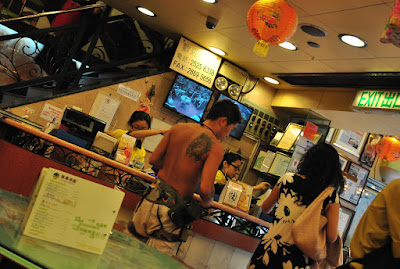 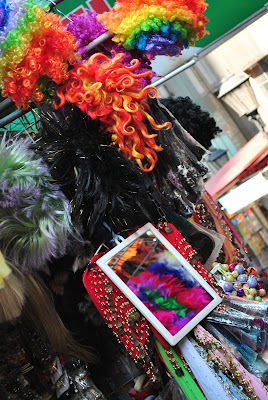 Flea market in Lan Kwai Fong.. I almost buy a rabbit ear here.. but somehow I changed my mind.. 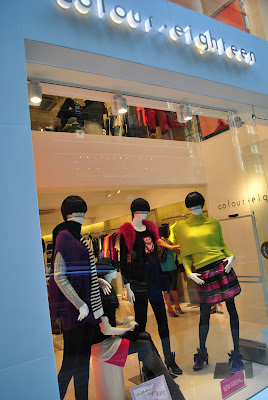 There are alot of nice boutique along the Lan Kwai Fong street.. but most of them are branded ones. 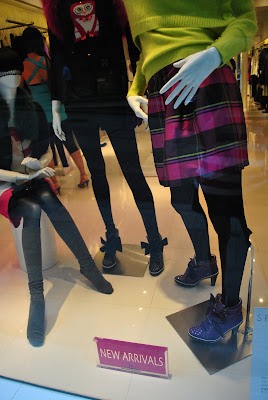 the shoes kinda remind me of sailormoon girl…and end up in my shoes rack now, for what reason? I also still confuse what to do with it.. 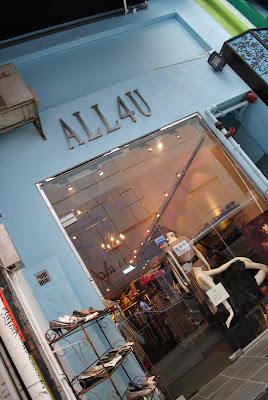 This shop selling original branded clothes and shoes, but at a way cheaper prices cuz…the pieces here are samples. You know.. before they mass produce certain collection, they came out with the sample first. And all the samples are sold in this shop. I bought MiuMiu top here, and my friend got her Juicy Couture and Karen Miller clothes here. We wish to buy the whole stuff inside.. but as I told u.. we only have HKD3,000 in our pocket, and already spent half of it in Disneyland =( 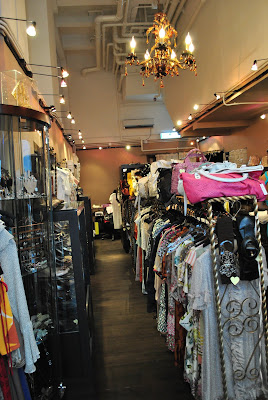 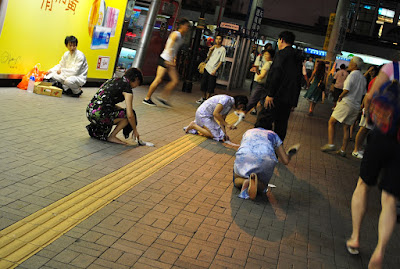 This scene captured right after the Star Ferry docked at Tsim Sha Tsui pier. Clueless what it was all about.. the guy scolding and the girls keep hitting a piece of paper with their shoes as if they hitting 1000 cockroaches. I thought they were in the middle of filming of funny movie directed by Stephen Chow or something… 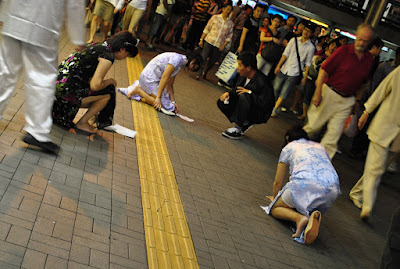 I got hundreds of picture took around HongKong city, but, too tired to upload.. so, I suggest you guys go here to see more of HongKong .