Nothing But Ordinary March.

God knows how much I want to update this blog. But every time I tried, I got pulled away by video on youtube. Video about cute babies, cats, dogs, stupid, pondan menyanyi and God knows it’s a weird weird alien world out there you can discover through youtube. And now I never failed to watch American Idol Season 12 before I sleep. I haven’t watch American Idol since Season 2. yep. From Auditions to Hollywood week to Sudden Death episode. Thanks to Keith Urban. He’s the reason why I watch the show. Heh. And I will continue to watch it because of Angela Miller, Curtis Finch, Charlie Askew and freaky Zoanette Johnson!

Most of the top 20 play musical instruments and some wrote & showcase their own song since the audition stage! But, my  personal , the Most favorite talent above of all is, Burnell Taylor! Call me too much, but, every time I listen to him singing, my eyes welling up with tears. I DON’T KNOW WHY! That’s how amazing Burnell Taylor is!


I don’t need Cable TV to watch full episode of American Idol Season 12, there are few youtubers has it in full 1.5 hours show uploaded onto the net. SANS commercial break .One of my favorite uploader is Marie De Conick. Yea her screen is tilted, but the quality sound and picture is good and I can repeat Burnell Taylor part as many as I want and scream alone in my room. Crazy.

I didn’t say my March started very well off this year. I got high fever and I felt weird. So I took a quick blood test and it says I got that Dengue fever. For a 2nd time. Hell no! The image of both arms poked by those big needles and bloated body rushing into my mind. I can’t stand the treatment. So I rushed to my sister and tried to get home remedy style. Thank God it worked. With TLC, any sickness well off faster than any other kind of remedy. Back at home town, I got my blood check at public, RM1, government hospital, or whatever you want to call it. The doctor said that Dengue fever works like Chicken Pox. Every human will only got it once in a life time. Seriously? But that is not what I heard! Cut the story short – I willing to pay whatever costs to be treated in private clinic. That short blood test process in that cheap hospital already killing me!

People says crab soup can help with the blood platelet growth. So my sister cooked me the BEST crab soup ever in this entire world when I was there. I will get the recipe and I will try to cook it again here in my poor kitchen. The next day, I got the recipe from my sister. 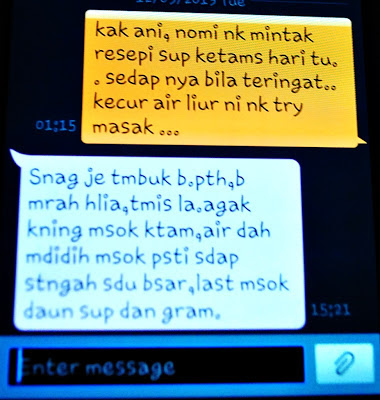 Er.. gitu je? I will try it this weekend. (Sorry for the spelling. Only I can understand what was she trying to say).

When I sick, my cat sick too. Not both, only one. The female one (Mogwai) . Her ears got infection. The doctor let me see what’s inside Mogwai ears under the microscope, and I swear I wont be hugging & kissing her for a while. That damn thing looks like scary crab monster!  So I had to gave her pills for a week until her ears completely dry. And brought her again together with her brother for another vaccination and ears treatment. Man, I felt like a single mother. While other pet owners arrive with their husband, friends, brother or friends with only 1 cat, I arrived alone with 2 cats. Anyways, my cats seemed to understand how difficult my situation at that point of time, they behaving so well although I carried them in without the pet carrier. Never a sound or a scratch. While other cats scream and hissing at the doctor, mine sit quietly on weighing scale and let the doctor do whatever to them. Let their ear dug by the doctor and got ear drops, injection, swallowed that deworm pill, got on weighing scale.. and many more. The doctor never stop saying they are very good & clever cat. It’s a miraculous moment! (The doctor should know how many stuff they wrecked it back home)

Ok. Im lazy now. Too much work at the office makes me lazy to do other things after work. I will end up this post like…right now.